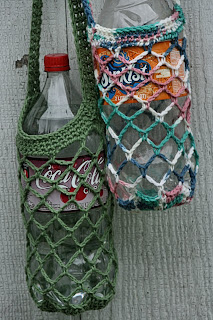 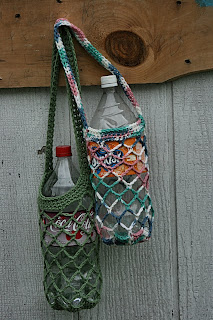 My husband works for Coca Cola and when we go on trips we might grab a 2liter bottle of some thing, be it Coke, Minute Maid or whatever. Some times we reuse the bottle for water. Here is a cozy/carrier to fit that bottle. It's nice to use to carry it or make a longer handle to hang off a rock or a branch and set the bottle in the water if you are near a lake or stream. Keeps it nice and cold.
It stretches to any fit tho so if you are a ...ahh... Pepsi fan...(slaps self on wrist) I guess that would be ok too! :o)

Using an I hook and worsted weight yarn

Strap Chain what you like for a lenght for the strap. Remember this will stretch some.
Mine is
Ch 60, sc in second ch from hook and in each ch accross, 3sc in last ch, working on opposite side, sc in bottom of each ch accross to last ch, 2sc in beginning ch.
Ch1, hdc in same st, and in each st accross to set of 3sc, in second sc of 3sc bunch 3hdc, hdc accross to last st, 3hdc in last st, fasten off, attatch to sides of carrier on the rnds 17-19.
Posted by Vallieskids at 3:38 AM